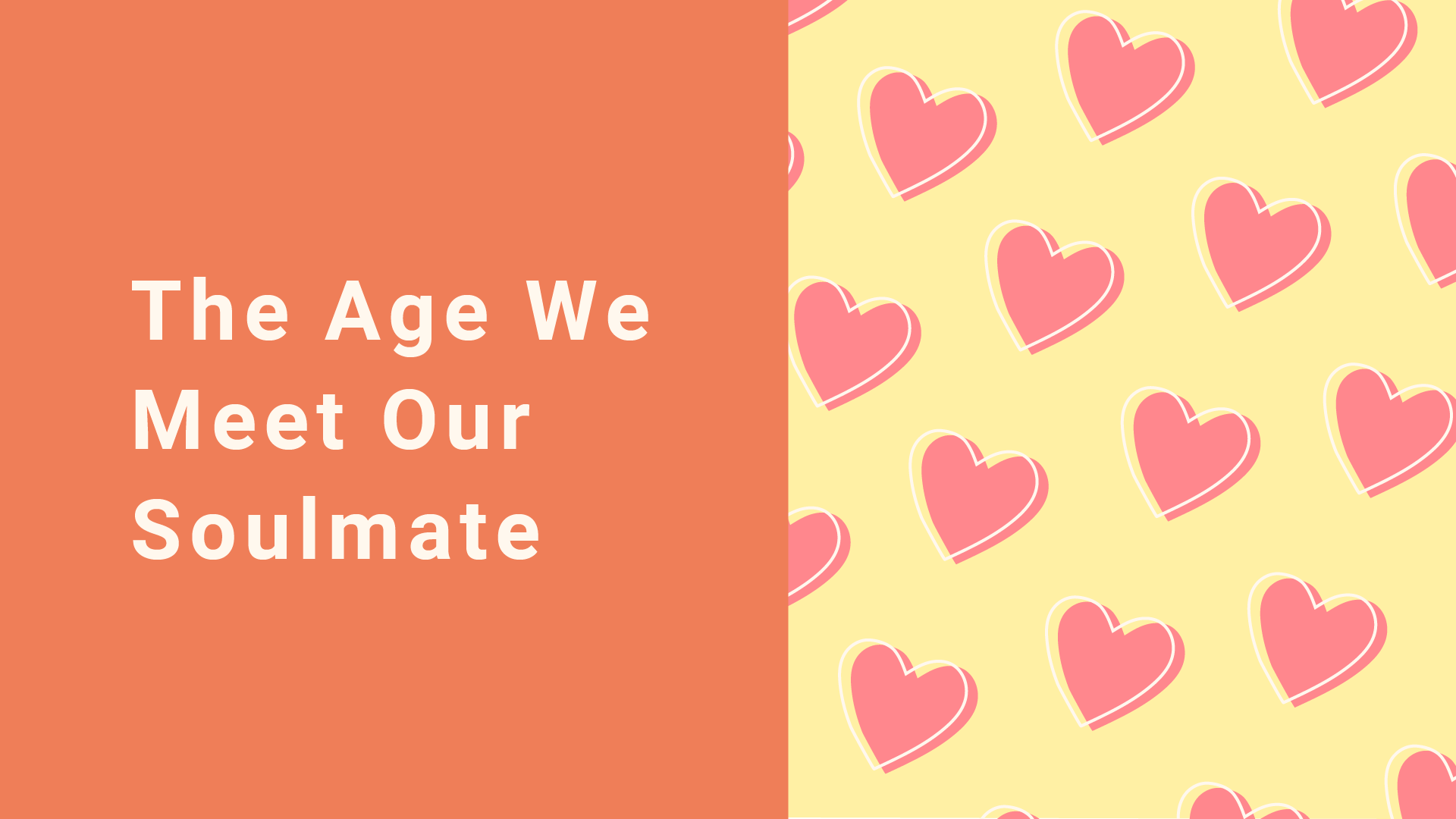 As the age-old saying goes, there’s somebody out there for everyone. But at what age are people fortunate to find their soulmate, and what made them realise they were the one?

We’ve asked Brits up and down the country all about meeting their other halves – from the where to the when, and how many frogs they had to kiss first!

So whether you’re just nosey or you’re wondering when you’re most likely to meet Mr or Mrs Right, read on. 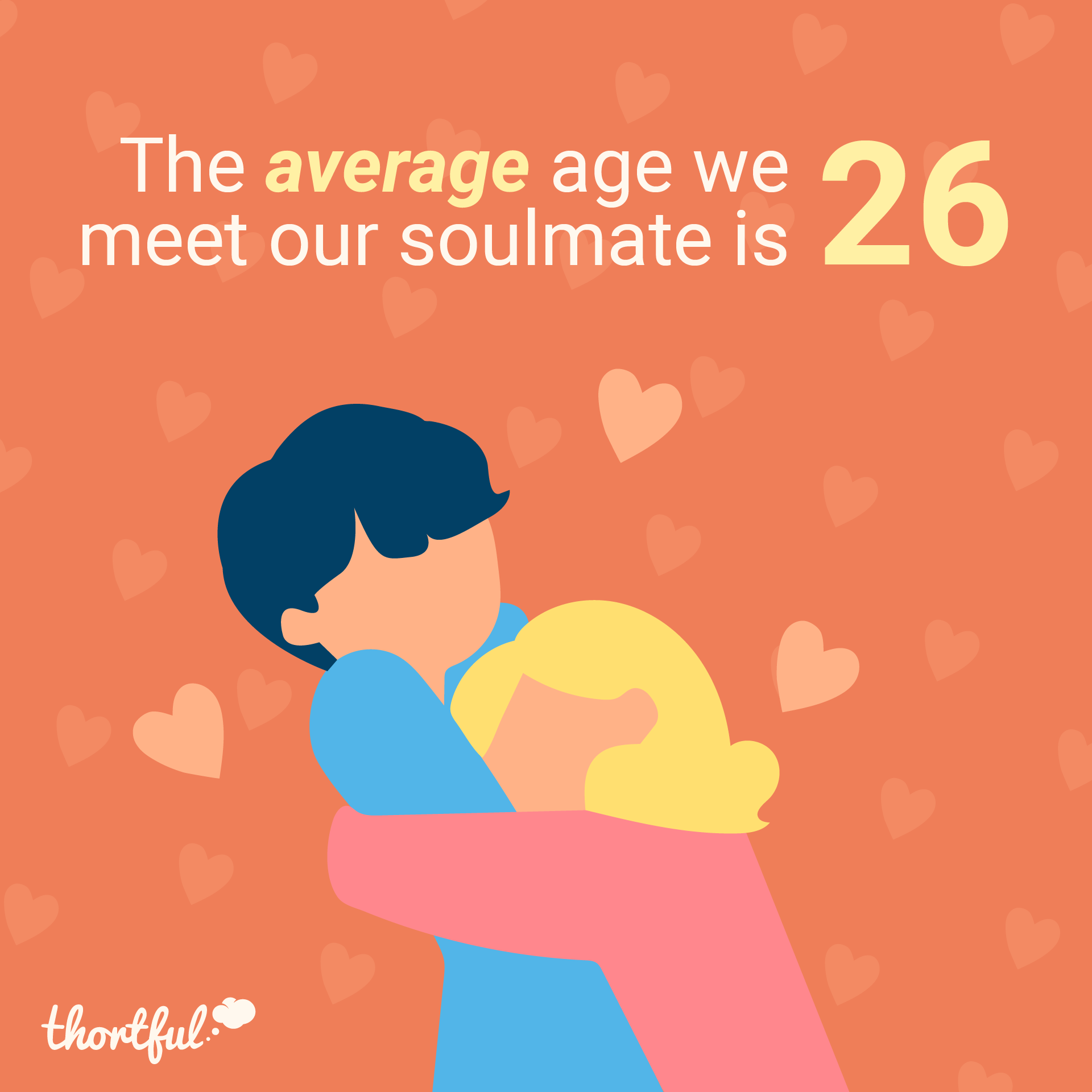 What’s the average age a Brit meets their soulmate?

The average age that we Brits meet our soulmates is (drum roll) … twenty-six!

That’s when folk from Glasgow, Nottingham, Manchester, Birmingham, London, Southampton, Norwich, and Nottingham all meet the one, on average. If that’s you, congratulations!

Hit by cupid’s arrow just slightly later in life are folks from Newcastle, Leeds and Sheffield, at twenty-seven.

And finally, Bristol and Edinburgh returned our oldest average age of twenty-eight, respectively. 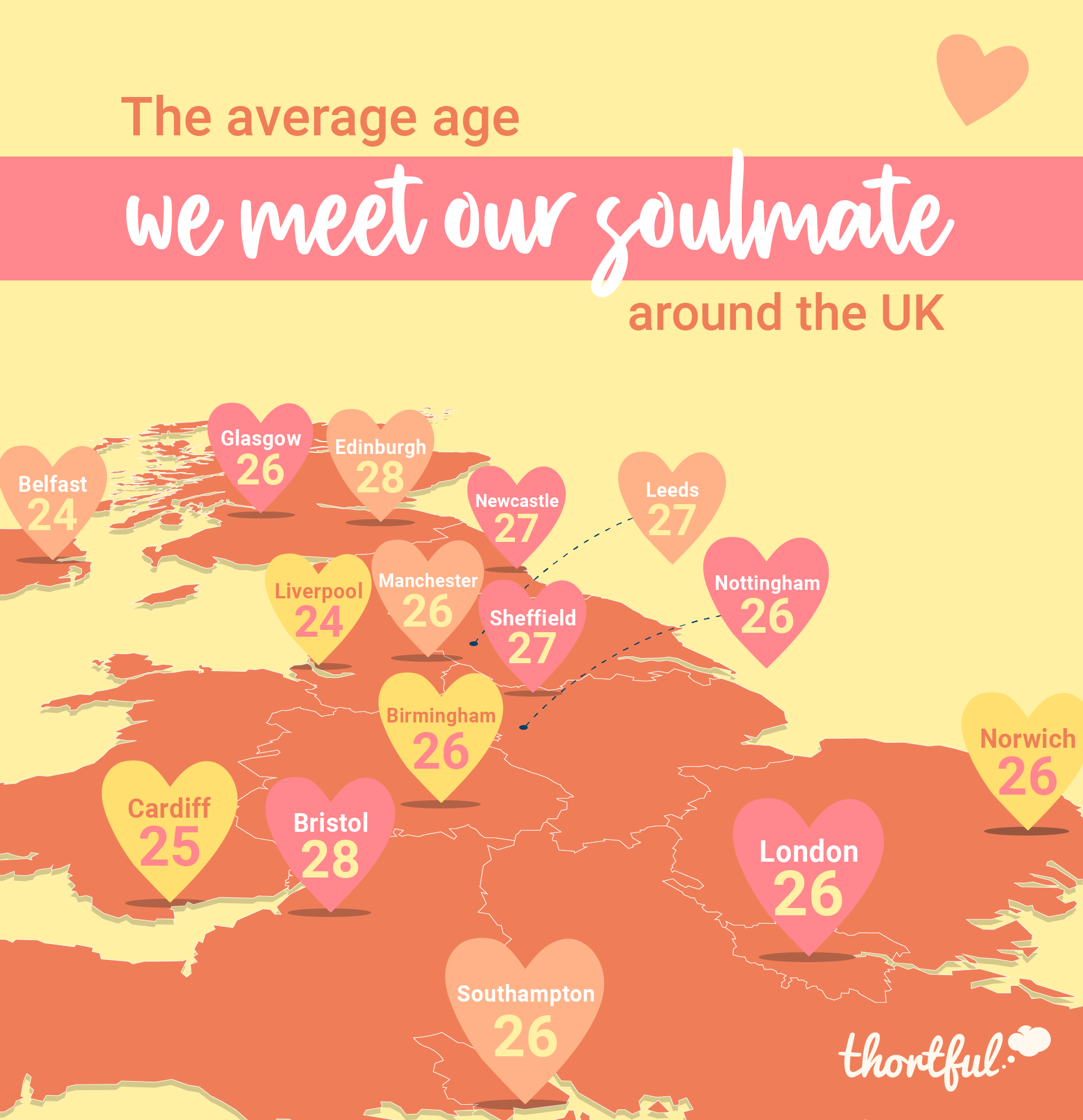 Turns out almost half of Brits are a romantic bunch at heart, as 49% of those we asked believe in soulmates. However, only 14% believed in love at first sight.

Another 12% sadly reported to have a one that got away, having been together but broken up. Similarly, 10% know they’ve met their soulmate but haven’t been with them romantically.

However, a love-struck 23% of Brits said they are currently in a romantic relationship with their soulmate. And another 9% say their soulmate is their best friend rather than romantic partner. N’aw.

So how does this fare from city to city? Our results also showed us which cities hold the most romantics and which take a more realistic approach to love.

Cities that believe in soulmates the most:

With 56% of their populations reporting to believe in soulmates, our results reveal Belfast and Liverpool hold the most starry-eyed romantics, followed by London, Leeds and Glasgow, with over half their inhabitants all reporting the same respectively.

… and the cities that don’t:

With just 25% of its population believing in soulmates, Norwich is low down on the list, closely followed by Newcastle, Nottingham and Leeds.

And, with just 19% of its population reporting to believe in soulmates, Cardiff is bringing up the rear as the city with the fewest believers.

Where do Brits meet their soulmates? 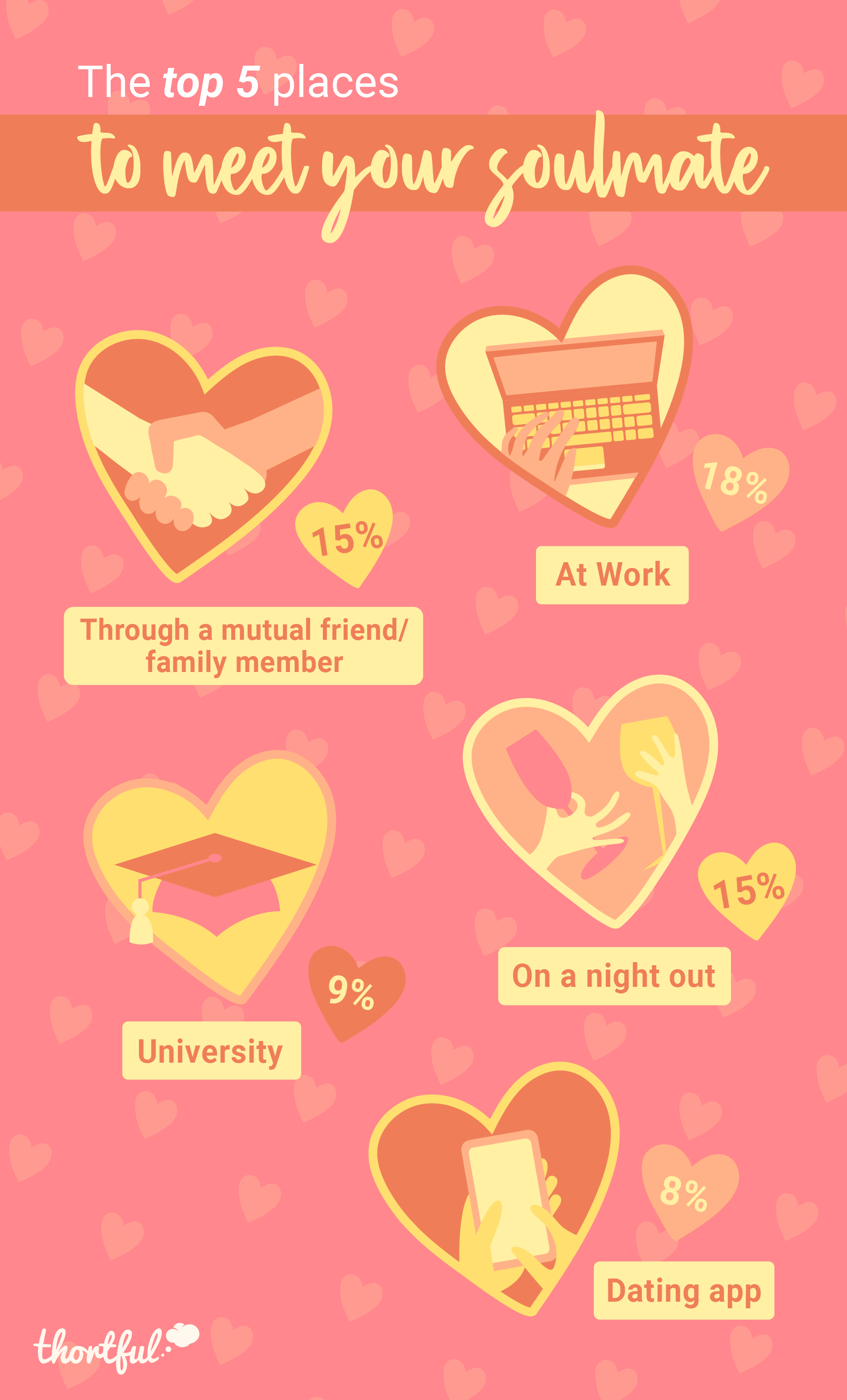 While it may feel like online apps are the only means of a modern-day romance nowadays, our study showed that only 8% of Brits met their soulmates on an app!

In fact, at 18%, the majority of Brits reported meeting their soulmate at work. Now, we’re not saying every Christmas party fling is destined for the long haul, but perhaps your one true love is sitting just a desk away, or that your ‘work wife’ could one day be the real thing…

Our study also revealed that more women find love in the workplace than men, while men are more likely to meet their soulmate on a night out.

The top 5 places to meet your soulmate were revealed as:

While these were the most popular ways of meeting the one, cupid’s arrow has struck in many different places.

5% of Brits said they met their soulmate back at school, while 4% reported a holiday romance turned out to be the real deal. For a lucky 3%, lasting love blossomed on a blind date.

How long did it take them to realise they’d met their soulmate?

We also asked Brits how long it took them to realise their partner was the one. Was it in the first throes of new love or after the heady honeymoon phase?

As many as 20% of Brits we asked said they knew that they’d met their soulmate instantly.

How many relationships did you have until you found your soulmate?

As Shakespeare put it, the course of true love never did run smooth. And most of us can expect to experience some trial and error when it comes to romance.

So unsurprisingly, at 68%, the majority of Brits have had at least one other romantic relationship before finding their soulmate.

However, some Brits have been very lucky in love: 23% said their soulmate was their first ever romantic partner!

Interestingly, men reported finding their soulmate quicker than women; 25% of men told us their soulmate was their first romantic partner, compared to 21% of women. Whether this reveals women are simply more selective or men are just luckier in love is up for debate!

So, how do our results stack up against your experience? Maybe you’ve met the one, are still looking for love, or perhaps your soulmate is your bestie.

Either way, it’s important to remember that if you didn’t find the love of your life at twenty-six, that’s very okay. Love comes in all forms, and we celebrate each one of them!

If you’re thinking of a special someone right now and want to share the love, tell them with one of our soulmate cards and one of our cute letterbox gifts.

For more fun reads and revealing insights, including how long it takes Brits to pop the question, head over to the thortful blog.

The UK’s most popular Halloween costumes 2022

What to write in a teacher’s leaving card