Fun party games for kids should be easy for everyone to join in, so we’ve focused on kids party ideas that are as accessible as possible for children of all ages.

We’ve also tried to ensure our kids birthday party ideas are as straightforward as possible for adults to arrange. After all, with the kids party food, birthday cake ideas, decorations, kids birthday cards and presents, and all the tidying up to think about, the last thing you need is a complex set of party game instructions!

Read on for some party game ideas that will help your kids party go down well with everybody.

All you need for a round of musical chairs is some music and the same number of chairs as there are guests at your party. Simply put someone in charge of playing the music, and as it plays ask the kids to walk or dance around the outside of the circle of chairs. When the music stops, every kid has to find a chair – but with each round a chair is removed from the circle!

Another time-honoured party classic, pass the parcel requires a bit of set up time but it’s not too complicated: just choose a present that the kids will enjoy and wrap it in several layers of wrapping paper or newspaper. When it’s time to play the game, ask all the kids to sit in a circle and, as the music plays, they pass the parcel between them. When the music stops, the kid holding the parcel removes a layer of wrapping. Carry on until one lucky kid gets the present! For extra fun, hide sweets in each layer of wrapping.

Hugely popular across the Atlantic but now easy to set up here in the UK, piñata is typically a large container made of papier-mâché that is colourfully decorated and filled with sweets. The piñata party game involves hanging the piñata from a string and then swinging it while blindfolded children try to whack it with a stick! Important to make sure everyone stands well back, and it can be wise to include a strap on the stick so that it doesn’t fly out of anyone’s hands while they attempt to explode the piñata!

For something a little calmer than piñata whacking, you could let your kids have a go at bobbing for apples. Simply fill a bucket with water, add some tasty apples, and then let the kids have a go at dunking their heads in the water and trying to grab an apple with their teeth! It sounds ridiculous but it keeps them entertained. Just be sure to play this one outside, as it can get a bit splashy!

Dice, a chocolate bar, some gloves, a hat, a scarf and some cutlery are all you need for a hilarious hour or so of fun with the chocolate game, one of the classic kids party games. Place the chocolate in the centre of a circle of children and ask them to take it in turns to roll the dice. When someone rolls a six, they get to put on the hat, scarf and gloves and attempt to eat the chocolate bar with a knife and fork – but the other kids will keep rolling and if another rolls a six they can take over the chocolate eating! This game is made all the more funny if you use an adult-sized pair of gloves. 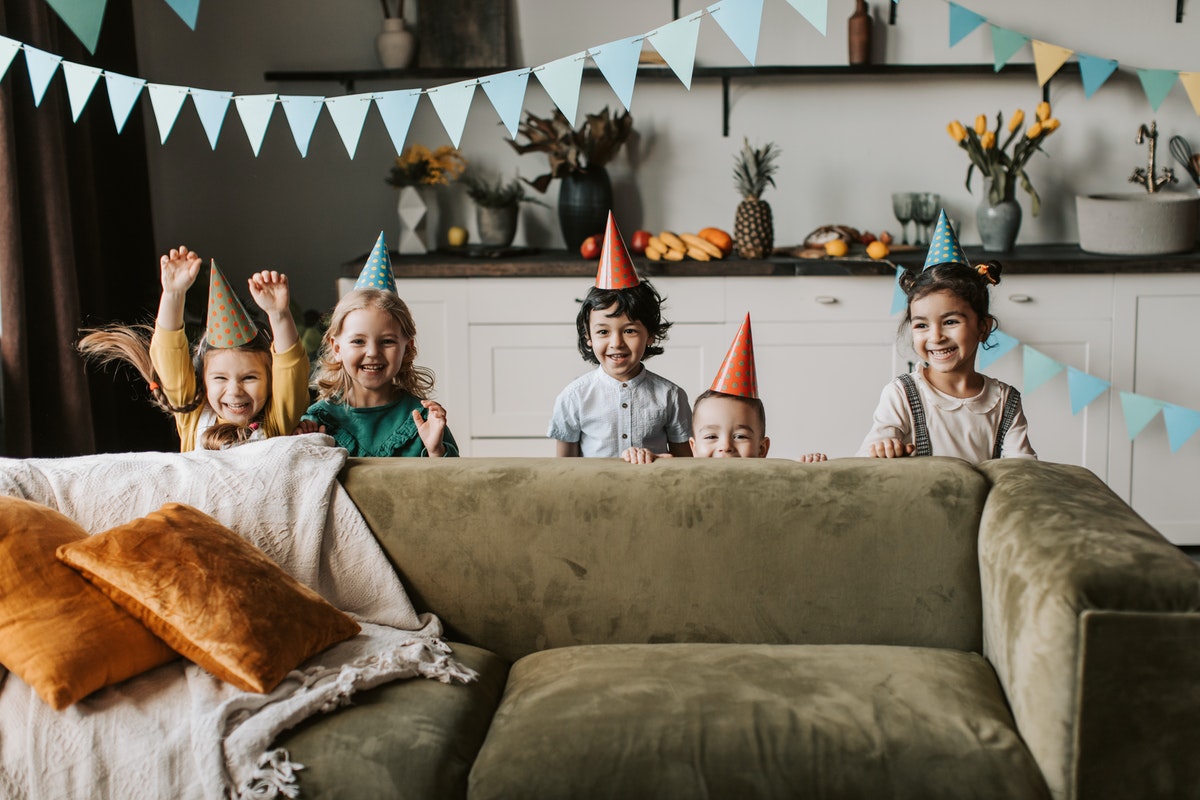 No props required for this one! Just nominate one person to be Simon, and have them give the party attendees instructions such as: “Simon says, touch your toes!” The catch being, whenever Simon doesn’t say, “Simon says” at the start of their instruction, the kids have to ignore it. If they don’t, they’re out of the game!

As long as you can find a stick and some music, you can limbo at your party! All the kids need to do for this fun kids party game is find a way of dancing under the horizontally placed stick while the music plays. Continually lower the bar, and see which kid can get the lowest!

If you’ve got the space for your party guests to run around, you could have an egg and spoon race! Just give each child a spoon upon which to hold their egg, and start the race. It’s not easy trying to run while balancing a wobbly egg on a spoon, so you might find it’s not the naturally fastest child who wins!

9. Pin the tail on the donkey

To play pin the tail on the donkey, you just need a picture of a donkey (or any other animal) on the wall. This could just be a simple outline and doesn’t have to be a work of art! The kids then take it in turns to be blindfolded and attempt to pin or stick a tail on the donkey in the right position. The kid who comes closest wins a prize!

Throw a party that younger children will absolutely love by turning it into a teddy bears’ picnic. Just ask all the guests to bring along their favourite teddy, and then when they arrive be ready with some teddy-themed activities like face painting, teddy bear sing-alongs, and teddy bear story time. Read our guide to hosting a teddy bears’ picnic for lots more cuddly ideas to incorporate!

For more child-friendly ideas, like fun crafts for the whole family, check out the rest of the thortful blog.