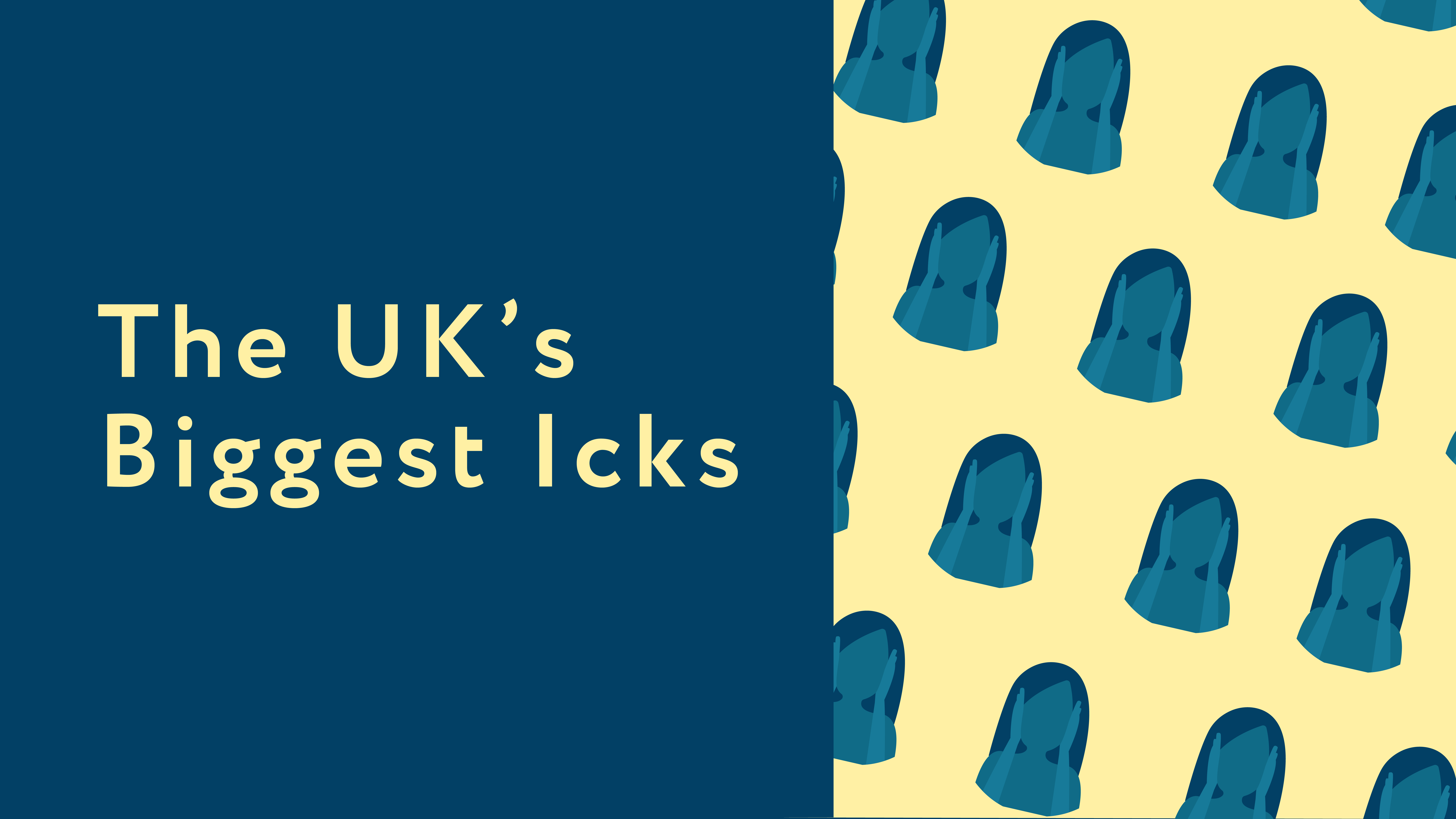 The dating scene has changed significantly in the last decade or so thanks to the rise of dating apps – and ‘the ick’ is a term that has really been making the rounds recently. In short, ‘getting the ick’ is when you quickly become turned off by your partner after something they’ve said or done.
And with our research finding that 52% of Brits have experienced the dreaded ‘ick’ whilst in a relationship, it’s clear that this is a shared experience – but what sort of things give us this icky feeling? Read on to find out what our research discovered…

What are the UK’s biggest icks? 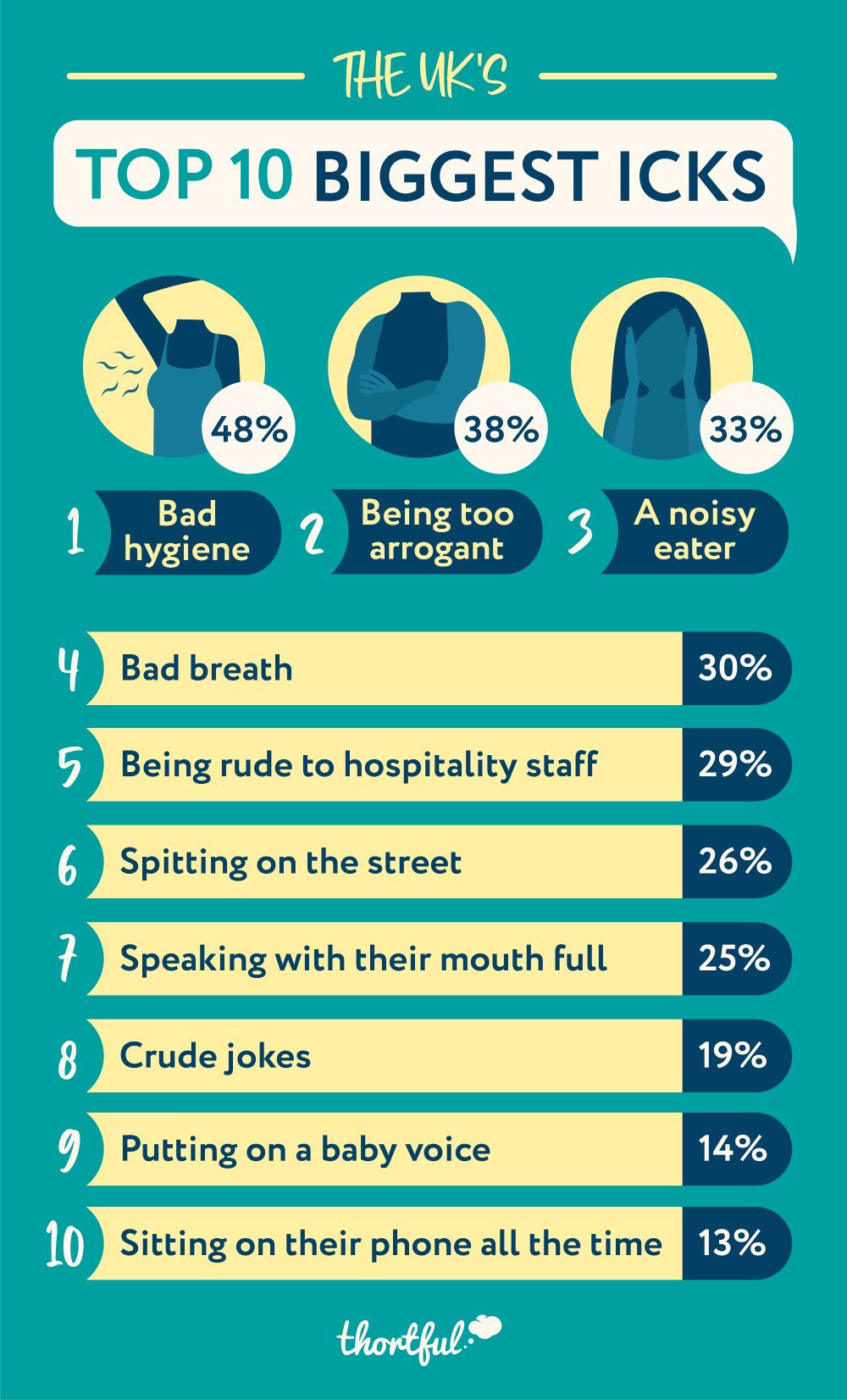 Wondering whether any of your personal icks make the top 10 or if you might’ve even accidentally given someone the ick yourself?

Well, it turns out the biggest ick-causer for us Brits is having bad personal hygiene, with almost 50% of us finding it a turn-off – so the next time you’re off out on a date be sure to freshen up beforehand.

Coming in second is being too arrogant, taking 38% of the vote, and while confidence can certainly be an attractive trait in a partner there is a fine line to be drawn between that and arrogance.

Next up is being a noisy eater at 33% which is a particularly good one to bear in mind for the next time you’re going out for food – it might be wise to avoid any overly crunchy food such as crispy chicken and tacos, or slurping your soup. Ew.

On a similar note, 30% of us can’t stand bad breath so along with noisy food you might want to reconsider getting that side of garlic bread (or just have some mints at the ready).

Again, another ick to watch out for at the restaurant is being rude to hospitality staff – this came in fifth with 29%. We do think this one should go without saying though as good manners cost nothing!

Spitting on the street is another habit that 26% of Brits agree can immediately spoil any potential romantic feelings, which seems a pretty reasonable response.

Other common icks that turned off a percentage of Brits include speaking with your mouth full at 25%, crude jokes at 19%, putting on a baby voice at 14% and rounding out the top 10 is sitting on their phone all the time at 13%.

Our research also revealed some quite peculiar icks with 6% of us unable to handle bad grammar (so, you might want to double-check that you’re using the correct they’re, their, and there). Not only that, but it seems there are some particularly niche icks as around one in 20 of us cannot handle heavy breathers, a mullet, or wearing speedos. Which, on balance, sounds pretty reasonable to us – all three of those at once is a lot to deal with.

Luckily, icks tend to be more of a passing feeling rather than a dealbreaker with less than three in 10 Brits actually going so far as to end a relationship after getting the ick.

So, the next time you’re feeling a bit icky it might be better to try and understand why you’re feeling that way and take it as an opportunity to improve your relationship.

Do men and women have different icks? 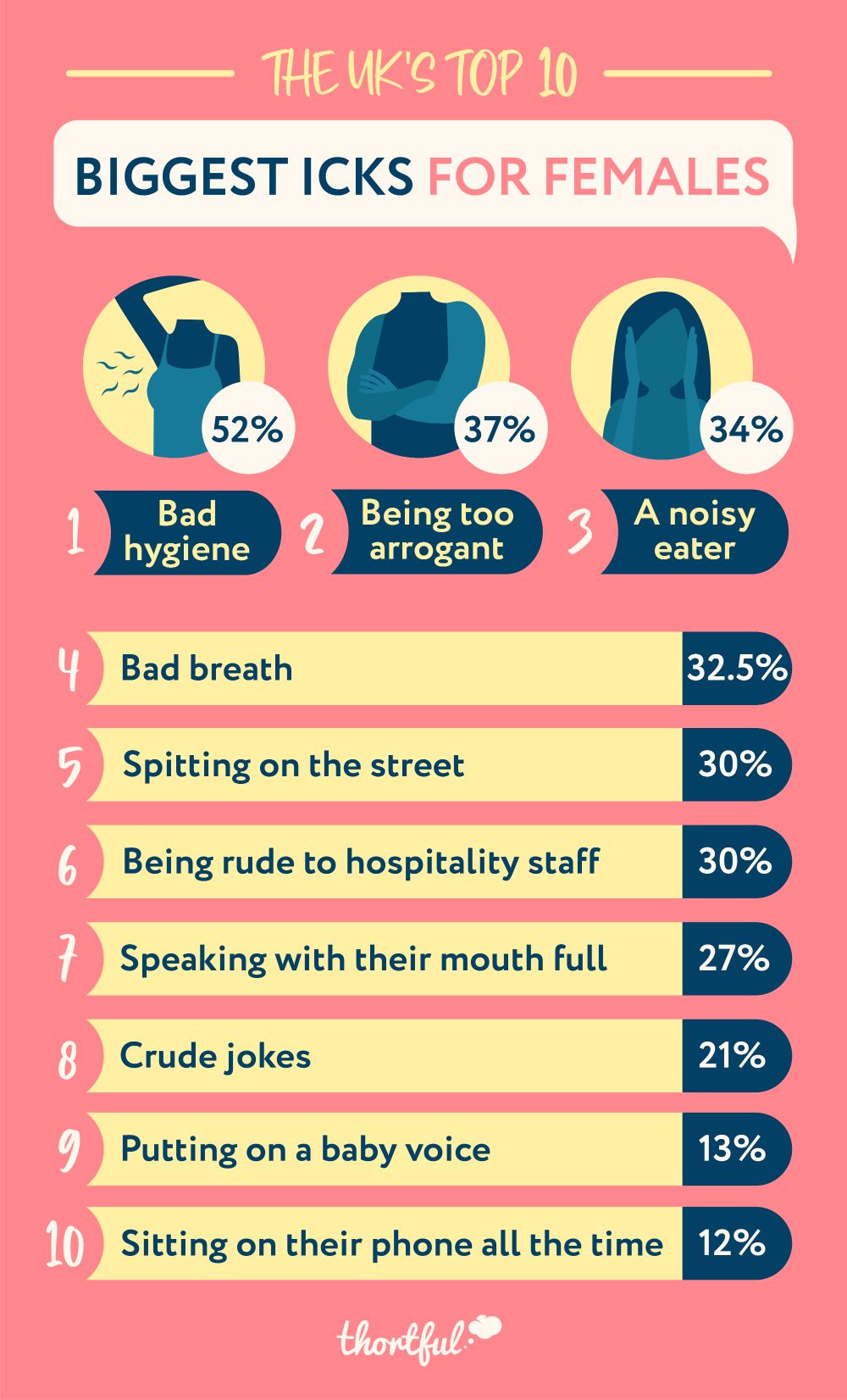 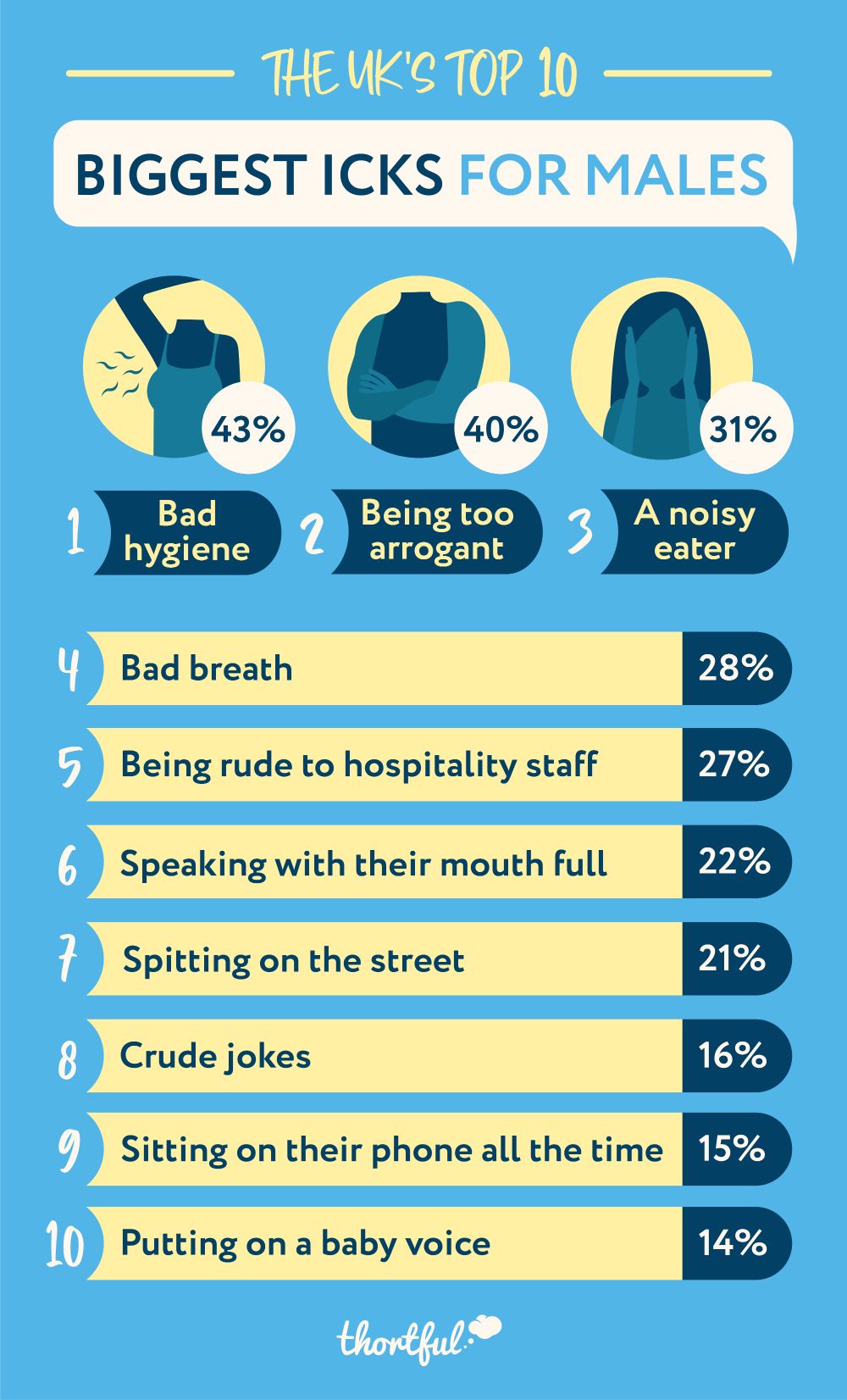 From the responses to our survey, we were able to see if there were any interesting differences between the genders as well and here’s what we found!

If you’re hoping to avoid giving someone the ick then you might want to try out our sensual scent sensation that we created last year. And if you’re lucky enough to find yourself in a long-term relationship without having ever developed the ick then why not check out our range of anniversary cards.

What to write in a teacher’s leaving card