The language of love is a complex thing. For some, it’s whisking away their other half on a surprise visit to Paris. For others, it’s about pouring their emotions into a beautifully crafted poem inside a romantic Valentine’s Day card. But for lots of us, our affection comes in the form of loving, cute, and often cringy pet names.

You know a couple are truly infatuated with one another when they start giving each other little endearing nicknames. While some of us come up with truly creative names that mean a lot to us personally, plenty of us fall back on traditional names that have been around for decades. This got us wondering – which pet names are the UK’s favourite?

To find out, we surveyed people of all ages, gender, and ethnicities from across the UK and broke the results down by country and region to see which names were most popular.

How many people call their partner by their pet name?

According to those we surveyed, 47% of couples address their partner by a pet name more often than their real name, with a further 56% saying they enjoyed being called their pet name at home.

However, when we step out into the public, it seems the vast majority of us like to stick to using our partners’ actual names. 76% of those we spoke to said they used their partner’s real name in public, and 32% of Brits did admit that they felt embarrassed calling their partner by their pet name in a public space.

Regardless of where you use your partner’s pet name, it seems almost all of us have one for each other. So, without further ado, here are the UK’s favourite pet names. 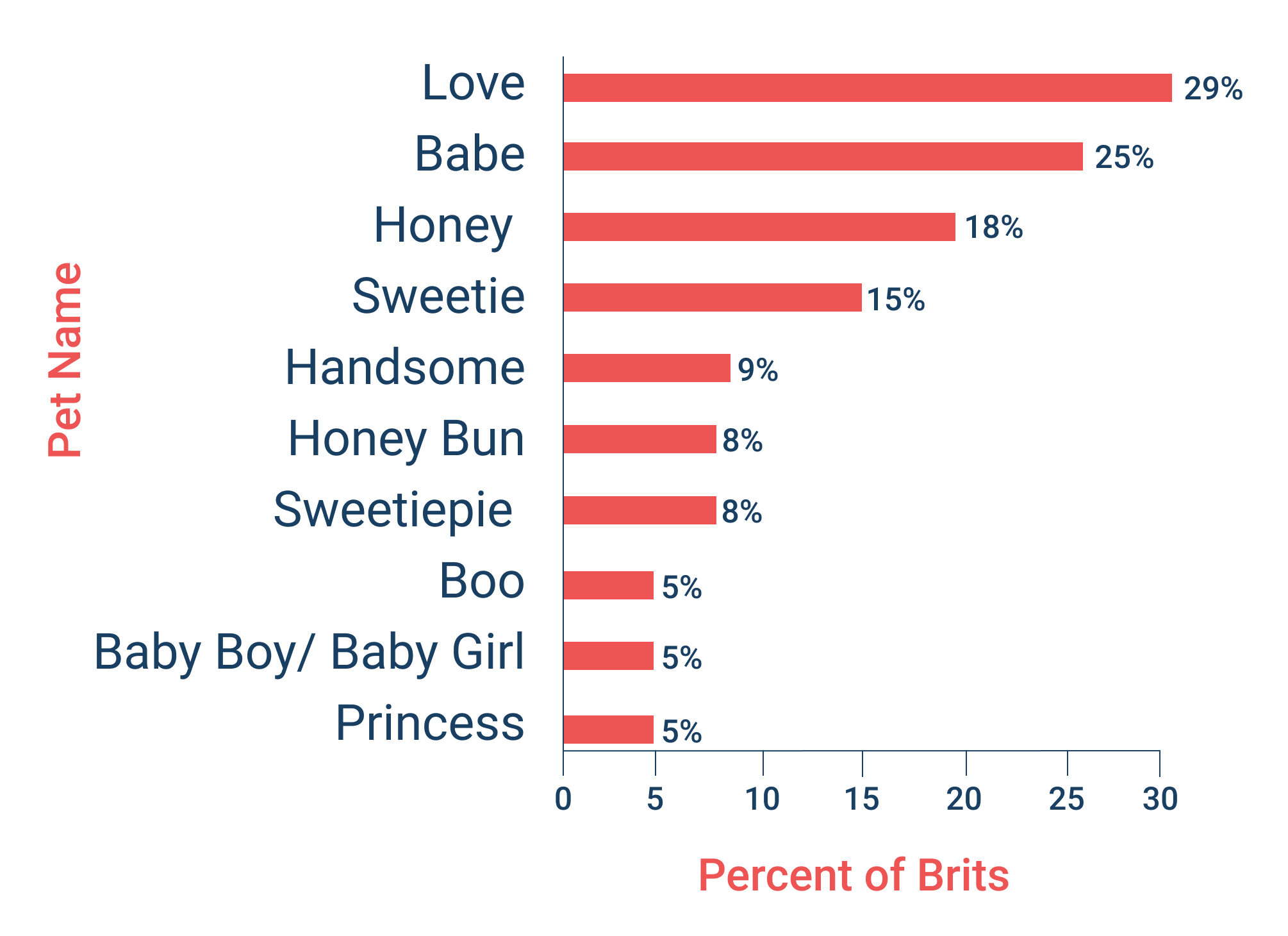 Unsurprisingly, love comes in at the very top of our list, being used by 29% of those we surveyed. That being said, babe was close behind, with 25% of those we asked naming it as their favourite. Combined, these two names make up for over half of the UK’s preferred pet names. So, what does that leave us with for the other eight?

Number eight is one for all you social media aficionados. A full 5% of those we surveyed love to call their other half boo, followed closely by a further 5% using the name baby boy/girl as an endearing term.

Last, but not least, for all of those holding out for their potential favourite, princess is the UK’s tenth favourite pet name, being used by 5% of those we asked.

Of course, these might be the UK’s overall favourite pet names, but what about gender-specific ones? While most popular male and female pet names match our overall list, popular female pet names include sunshine and sugarplum at 6% and 5% respectively, and roughly 8% of men are called daddy by their other half.

While those might be our favourite pet names to use across the UK, how do they vary to those used on a city-by-city basis?

Based on the previous results, it should come as little surprise that love or babe consistently share the top spot for every city, with our five most popular names often filling the top five slots in various orders.

However, it’s clear that some of the names that are less popular overall are very popular in certain cities. In Belfast, for example, baby boy/girl takes the fifth spot with 10% of people using it as their preferred pet name. Leeds surprised us even more, with a name that didn’t make our overall top ten squeezing into the fifth spot. It turns out chica is a popular name to use in Leeds, favoured by 10% of those we asked.

While these might be the UK’s favourite pet names to call each other, we’ve no doubt that plenty of you have your own little nicknames that didn’t make the cut but are perfect for you and your partner.

The psychology of pet names

We also spoke to Barbara Santini, who is a psychologist and a professional sex and relationship advisor. She told us that ‘Couples tend to have pet names for their partners that can be sourced from animals, foods, or things they like.’

While pet names might feel uniquely romantic and lovey-dovey, it turns out it has something to do with your childhood. Barbara says ‘Partners can decide to have pet names as this is the pattern followed and known from their own childhood. Just like mothers give their kids pet names to help them understand the feelings, close and special relation or teach new language of affection. Lovers can opt to give each other pet names to express the special relationship between themselves.’

‘The pet name is kind of internal code understood by the partners as it might relate to the joke, situation, something they have experience together which connected them. Using pet names in a relationship expresses love, bond in a unique and instant way.’

Barbara also tells us that pet names can be considered as a happiness indicator. ‘Satisfied and happy couples tend to call each other pet names to stress the fun, joy and close connection they experience.’

Is your other half’s birthday coming up? Are you about to celebrate your anniversary? Whatever the occasion, you’re going to need the right card to scrawl your beloved’s pet name across.

What to do on your birthday